I’m not a sentimental person when it comes visiting the graves of those who have gone on before me. I miss them; I long for conversations; I look forward to seeing them again someday on another plane of existence prepared by God. But I’m not a cemetery visitor- at least not in that sense.

I don’t go out to visit friends’ or relatives’ gravesites regularly, or place flowers or flags on at certain times of the year. I know many do.  I know that it gives them comfort to go out to the cemetery, pull a few weeds, leave a memento, put fresh flowers in a vase, clear away the dead leaves that accumulate around the stone and have a chat with their departed loved one.

I do believe the story of a community is told, in part, by the words on those stones. Some have long lovely poems inscribed; some simply have names and dates of birth and death separated by that inevitable “dash.”

Here, I read on a stone that this sweet babe was lovingly placed here at the age of two months and I wonder if the mother carried the burden of sorrow the rest of her life without other children to cheer her. Then I see, three more small stones next to the first and know on that slightly larger stone next to them that she succumbed shortly after the last little headstone.  I see the father’s stone next to hers with many years between the first and last dates. There, on the other side of his stone, another woman’s name with his last name added and beside her stone, two more small ones. Heavy burdens indeed.

I read another that has the name, rank and regiment on it that has “loving husband and father” etched below the dates. I do the math. He was 29. He gave all to defend his home and country in a long gone war that men fought a century ago. 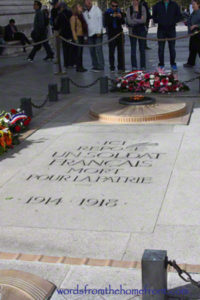 Over in the corner of another cemetery stands a large black granite monument. Some person of rank or authority. I read the name. I read the dates. I do the math.  This one lived a long life.  A solitary life from the looks of it, there are no other names or dates on the monument. There are no other large stones nearby. I do find two small solitary stones standing upright many feet away. The surname is the same and dates correlate with people who could have been his parents. I wonder about this one and a tale begins to weave in my head about what kind of life was lived by this one.

Cemeteries are storytellers. They are places of sadness when death occurs. They stand as sentinels of the inevitable. They are ossuaries, repositories of bones and holders of history.

We humans place a lot of significance on bodies and bones. We care for them in places that look like what we imagine Elysian Fields might look. Or we stack bone upon bone to stand in silent testimony to reveal the atrocities we do to each other. Some lovingly scatter ashes of bones out upon the spot in the world that has meaning to them. Some visit the resting place of a famous person who once inspired and leave a solitary flower or scrap of paper with words they wrote as a result of the dead one’s life. Some have built great churches upon the bones of those who have come before.

I suppose there is a lesson somewhere in this little discourse in that I’m not a visitor to a particular stone in a particular cemetery at a regular time and date.  I prefer to think that these stones are testimonies to lives lived. Well or ill, long or short.  They are reminders to me- that I do not belong here. That I, too, will leave this corporeal existence and move on to where I really belong:

Now faith is confidence in what we hope for and assurance about what we do not see. This is what the ancients were commended for. By faith we understand that the universe was formed at God’s command, so that what is seen was not made out of what was visible. Hebrews 11:1-3

Between these two sets of verses there is what is called the ‘roll call of the faithful’; a list of patriarchs and matriarchs and their faith in scripture. What is most telling and is more important to me is what occurs here- before and after the dashes of their lives.

All these people were still living by faith when they died. They did not receive the things promised; they only saw them and welcomed them from a distance. And they admitted that they were aliens and strangers on earth. People who say such things show that they are looking for a country of their own. If they had been thinking of the country they had left, they would have had opportunity to return. Instead, they were longing for a better country – a heavenly one. Therefore God is not ashamed to be called their God, for he has prepared a city for them. Hebrews 11:13-16

And, Peter gives a description of what our dash should be like:

Dear friends, I urge you as aliens and strangers in the world, to abstain from sinful desires, which war against your soul. Live such good lives among the pagans that though they accuse you of doing wrong, they may see your good deeds and glorify God on the day he visits us.  1Peter 2:10-12

I am an alien and stranger here. I hope to live the rest of my days here remembering that I am and that I am looking for a country of my own. 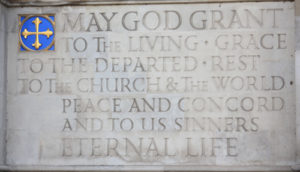