Sarah said, ‘God has brought me laughter, and everyone who hears about this will laugh with me.’ Genesis 21:6

Another new life! A few months ago I wrote about the latest addition to the family in “Dear Little Man.”  I was overcome with the joy of new life, still am.

Now, I find myself wanting to write of our newest member, the gift of Isaac, who appropriately came home from the hospital on Mother’s Day.  He is indeed a gift! A quiet, calm baby from all accounts so far. He will have to insert himself into this little family with an older sister and brother to look up to and admire. They think he’s the cat’s pajamas and big sis loves to hold him- right now. Later, he will be the little brother, next to the other little brother. 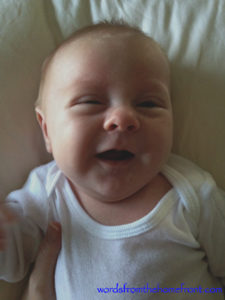 He has a wise, open face that seems to me to be that of a very old soul. He looks deeply into my face, searching for something I’m not sure that he does or does not find. We’ve not had much one on one time yet. It’s like that when there are others clamoring for attention. 8 others.

I know that spouting about 9 grandchildren may sound prideful. It is not. These children are the highest blessing I could ask for on earth.  The Lord has truly made up for the years the locusts ate out of my heart.

I was born into a family, quite by accident (if you know what I mean); a marriage ensued, I was born and then I suppose the first 6 months of “bliss” with new baby wore off along with the attraction that brought them together. I was handed off to a grandmother who, as she put it, “there was no one else to take you.”

My birth mother had been adopted from a children’s home and her first adoptive mother died within a year or two. Her father could not take care of her so she was sent back to the children’s home and then later as a near teen was adopted out again. It must not have gone well because she was out and on her own and I was born when she was 17. My birth father was 22 and just returned from a tour of duty in post-war Japan. Neither was prepared nor able to be a parent.

I grew up in a household that was tumultuous at best, deeply dysfunctional and influenced by alcoholism at it’s worst with a generous serving of emotional manipulation thrown in for good measure. I was the pawn in my grandmother’s chess game of life.  She used me to manipulate the people around her. She didn’t often realize consciously that she was doing so, but she just had to be on top every time and if I was the pawn needed….

There were no siblings, only me. At times I felt greatly loved but there were times when I was sorely neglected. Mostly emotionally, left to my own devices. There were also times my grandmother allowed me to be in danger in situations with people I didn’t know.

She had faulty trust filters.  Either everyone in the world could be trusted or no one could be trusted. As a result, her judgment was often swayed by her most immediate previous trust experience. If it had gone well, she was off and running again in the trust everyone direction. Sometimes, I was the victim and sometimes I was the happy recipient. She would often leave me with her friends and considering that she was not a very good judge of character, some of those people felt very dangerous to me- at other times- they would be of the kindest, gentlest nature and I was drawn to them and their country way of life.

I found that my internal radar would go into overdrive and I would pretty much shut down around those that I felt were untrustworthy- I would not talk, I would make myself small, and I would read, and read, and read.  Until she picked me up again.  I look back on those times and realize that I was indeed in danger with some of those people, and that God in His providence, set His angels round about me.

I went from ‘pillar to post’ as she would say about some things- meaning never in one spot very long. That was her life she was describing though. I was subject to the frequent moves due to my grandfather being in the Air Force-never in one place very long. And, when she would find she couldn’t deal with me and whatever else was going on in her life she would send me off to my father and his new wife for months at a time.  Do we ever really know what’s going on in someone else’s head or heart?

There were occasions, as I look back on my childhood where I saw a very loving, generous woman. She would pick up any and every hitchhiker between Texas and Tennessee when we traveled back to her family’s hometown in east Tennessee. She would give her friends the very clothes she had if they had need. She would take food, and my clothes (sometimes I had actually out grown them) for their children. She would keep track of those women who she knew would be in need by the nature of their marriages, and when they found themselves forced to move again to escape the spouse or because they were evicted from a previous spot she would take cleaning items with her and clean the new place from top to bottom and she would take food from the garden and me to help. Often the children were younger than me, their mothers were marginally able to care for themselves let alone their babes. I became the entertainment coordinator and child rodeo expert. I would want to fly away to anywhere but there- I didn’t understand- then. I do now.

As I got older she began to share snippets of her life with me. My father, her son, was born less than a year into a marriage that she entered into, out of spite, in anger at her father, to get away from home. She left her husband, and left my father with her parents when he was a babe in arms. Eventually, it came out that she had been married many (at least 7 documented) times, had attended nursing school at one time, and had run cafes and restaurants along the way in the south as she traveled further and further from home. She implied she had also done what she had to do from time to time to survive- use your imagination. My response to that information was that I’d starve before I would do anything like she did; I told her we always have a choice. I still believe that.

She went from Tennessee to North Carolina to Georgia to Alabama and then on to Texas. in Texas, she found herself in a marriage that took her 20 years to get loose from the man who was physically and emotionally abusive. She finally escaped with his mother and sister’s help and years later, took me to visit them. He was dead by then. They seemed nice.

She then married an artist- and that lasted all of about a year and a half. Then she met my grandfather and married him at the beginning of the year that I was born in November. He was already in Korea when she was given custody of me, so they hadn’t been together very long. She had managed to save enough when she was on her own to buy some land and had had a one-room house (shack) built on it- it had a kitchen area with a sink and a hot plate, and on the back porch a tub and a toilet. TWhat was where we lived off and on until I was 4. There was a short stint in Kansas.  She would trade veggies for chickens, bread, butter, whatever we needed to live on. She bartered and begged and borrowed- we were poor, just not dirt poor.

And, during that time she became the first woman taxi driver -at least for the company she worked for in San Antonio- according to her. She sent me to nursery school at the age of 3 and there for the first time in my life I knew I was in a safe place. I was where they taught me about Jesus. God is so Good!

My life growing up and living with her, then watching her age and age and age and watch her deteriorate physically, continue to make poor decisions and refuse to give in to the very end was never calm, always stressful, and sometimes dangerous.  My children loved her very much; knew she was crazy and thought it was funny. I on the other hand….

Now my stage of life is coming close to where she was when I had my children –only she was their great grandmother. I am the grandmother. I love my grands with a fierceness that I don’t think even my own children understand.

I have a full family around me, and the never-ending joy of children close and far away. I think it very appropriate for Isaac to be Isaac and to be the youngest grandchild for us. Isaac means laughter and that is what every family needs.

He has already started to bring it to us as you can see in the pictures below- only a few days old and already perfecting the meaning of his name. Thank you, Lord, for the restoration of laughter in my life! 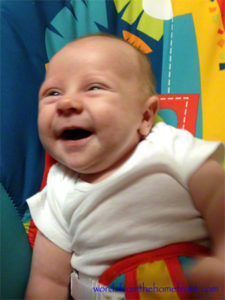