Hmm, have you ever gotten ready to go on vacation and the closer it gets the more you dread going?

Sometimes, when it’s not a place I’ve been before, I get cold pricklies about going and making everyone else miserable. That would be Dougie. He works hard and deserves to have a nice, interesting time away without me being in the doldrums.

So, this time, even though I dreaded it, I was determined to enjoy all of it, even down to the coffee!

And, you know what?

Even the rainy days!

The east coast of New England was beautiful, the leaves in New England were just beginning to turn, we saw beautiful old houses and places that have incredible meaning for us Americans.

To think that the farmers in Concord were the catalyst that led to the Declaration of Independence a mere 15 months later; that where we are is dependent on where we came from. That this country is what it became due to a few good people determined to have freedom- of speech, religion, to protect themselves and their property.  That this country is still the guardian of those freedoms thanks to the lives of many service men and women who have voluntarily given their lives to protect the rest of us and the freedoms we have come to expect. 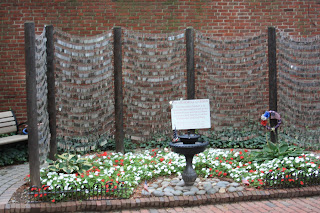 We came upon this memorial to the service men and women who lost their lives in Afganistan and Iraq as we were walking in Boston from Paul Revere’s home to the Old North Church. It took my breath away and I had to give the camera to Douglas to take the picture- I wanted to touch each one, to tell each name thank you, to pray for their families. It felt like I had come upon the graves of my own children. These young men and women personified Jesus’ words in John 15:12-14:

“This is my commandment, That ye love one another, as I have loved you.

Greater love hath no man than this, that a man lay down his life for his friends.

Ye are my friends, if ye do whatsoever I command you.”

They didn’t even know me and they chose to serve and protect this country- including me. The thought is overwhelming. I can’t dig very deeply or I’m immobilized by humility and grief. All I can say is Thank You, and God forgive me for taking this life for granted.